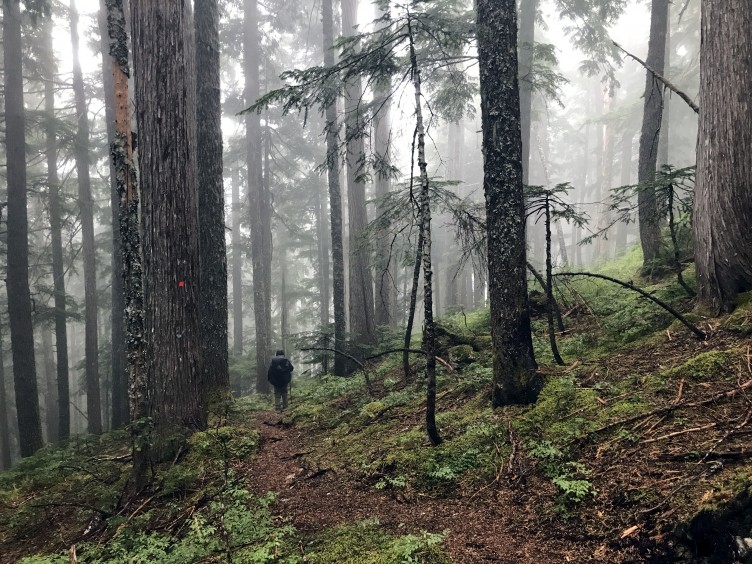 Last summer, Mathieu and I thru-hiked the Sunshine Coast Trail.  Yep, we hiked 180 km, up and down small mountains, carrying everything on our backs. Like any big adventure, we had some highs and some lows, but overall we had a great time, and would totally recommend this trail.

As part of our trip preparation, we learned how to make dehydrated food to bring with us, food that is light, easy to rehydrate, with enough calories to sustain us, and also tasty.  We’ll be posting about those later, but for now I’ll just talk about the trail.

The Sunshine Coast Trail is about 180 linear km,  based in Powell River (British Columbia), which is approximately 150 km north of Vancouver.  It is entirely volunteer-run, and is free to access.  That’s right, it’s totally free, no permits necessary.  Take that, West Coast Trail!  But just because it’s being taken care of by volunteers, don’t think that it’s second rate.  The trail is lovingly maintained, with plenty of signs, sturdy footbridges, and the most unique aspect:  wooden huts spaced regularly along the trail that can be used for shelter and sleeping. 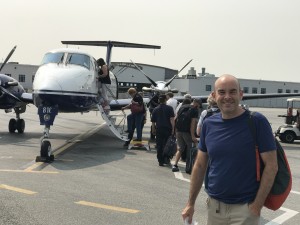 Accessing the trailhead is also a bit tricky, if you want to go from end to end.  The trail association recommends hiking from north to south, so that you can enjoy the hike without passing too many people, which means starting at Sarah Point.  However, Sarah Point can only be accessed via a logging road (4X4 only), or by boat.  There is a water taxi company that will take you there, but we chose to use a 4×4 service called Sunshine Coast Shuttle.  We were very pleased with Jesse, and would happily recommend him.  He also volunteers on the trail, so is a good source of information.

The other end of the trail brings you to the Saltery Bay ferry terminal.  Travel options from here are limited, unless you can just hop on the ferry and go.  If you want to get back to Powell River, the local bus is on demand only, and requires 24 hours notice (and let’s face it it’s hard to predict when you are going to arrive at the end of the trail).  There is an inter-city bus that can take you back to Powell River, but it only comes by once or twice a day, depending on the time of year.  Other options are hitchhiking, or calling a cab. 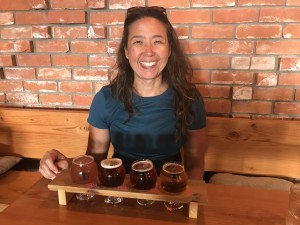 We flew from Toronto to Vancouver, and then from Vancouver to Powell River. The plane to Powell River was the smallest plane either of us had ever been on (Beechraft 1900c), very fun! We took the local bus from the airport to town, although it was close enough that we could have walked.  We picked up a few things we couldn’t fly with (camp fuel, matches) at Powell River Outdoors, then went to our motel, Island View Lodge. It was nothing fancy, but it did the job.  I had a nice flight of beer at the local, Townsite Brewing, which was a great way to kick off the trip, then off to bed early. 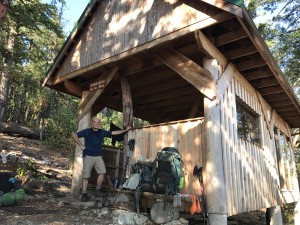 Jesse from Sunshine Coast Shuttle picked us up at the motel and took us near the trailhead, a ride of about an hour.  From the drop-off point, it was a short walk downhill to the actual trailhead.  The starting point was not particularly impressive, it was just a tiny sign just like all the other signs on the trail, but oh 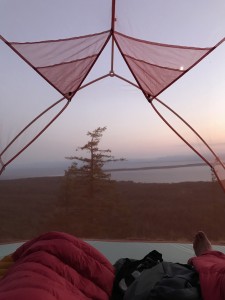 well.  And then we were on our way, each loaded with about 25 lb packs on our backs!  This part of the trail hugs the coast for a while then heads inland.  There were some rolling hills, and it was quite hot and sunny.  We stopped for a swim at Wednesday Lake, which was wonderfully refreshing. Our first night was spent at Manzanita Hut, with 10 other people.  Luckily the hut and camping area was quite large, so it was able to accommodate all of us without issue.  For privacy, we decided to set up our tent, overlooking a lovely sunset over the Salish Sea, then headed for bed.  The night sky was amazing with so many stars! 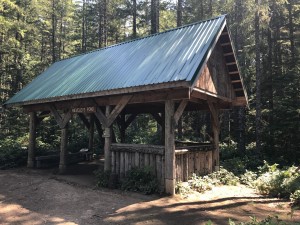 We were still jet-lagged, so we got up pretty early and were on our way.  We had been told that there was no water for the next 11 km, so we rationed ours carefully, but we found water along the way without difficulty.  We stopped for lunch at Plummer Creek, and Mathieu also tried to take care of some blisters that were forming.  These would be a problem for him for the first half of the trip.  We stopped for a brief rest and look around at Rieveley Pond Hut, which looked like a great place to stay. 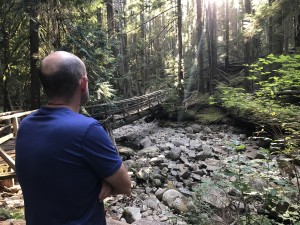 The pond itself was kind of murky, with lots of mud and lily pads.  Likely a lot of frogs, too!  But we pushed on, and camped at what we think was Appleton Creek campsite (it wasn’t marked).  In contrast to the previous night, we were all by ourselves.  I think most people spent the night at Rieveley Pond Hut, although one group of 3 went further than us.  The creek was fast moving and the water was quite cold, which felt good on our sore feet.  We enjoyed our solitude, nestled in the woods.

After some breakfast and packing up, we resumed our hike.  It was an exciting day, because this day would end back in Powell River, and we were planning on having lunch at the Shinglemill Pub!  After a couple of days of hiking, we were looking forward to some greasy food and beer!  We stopped for another swim at Shangri-La (it’s amazing how refreshing a swim can be if you haven’t showered in a while), but otherwise kept chugging along.  We noticed that the campsite at Sliammon Lake (km 40.0) looked much nicer than the one at Appleton Creek, so we regretted not spending the night there.  Up to this point, the trail had been very well marked, with frequent signs and rarely any question as to where to go.  But as we approached town, all the signs disappeared.  This would actually be a trend for the whole trail – in the woods, the signage is excellent.  But close to roads and towns, they were pretty much absent.  It was a little frustrating.  The descent from the trail into town was quite steep and rocky, and killed my knees.  That, combined with the fact that it was hot, sunny, and fully exp 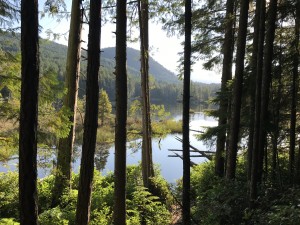 osed, made me really happy to be sitting at a pub with a cold beer by 2:30pm.  From the pub, it was a short walk back to Island View Lodge, where we had a hot shower (yay!) and a nice bed to sleep in (yay!).  We also had a re-supply of food waiting for us, that the people at the lodge kindly let us leave behind on day 1. That was very much appreciated, and it made a huge difference in our pack weight on this first leg of the hike!