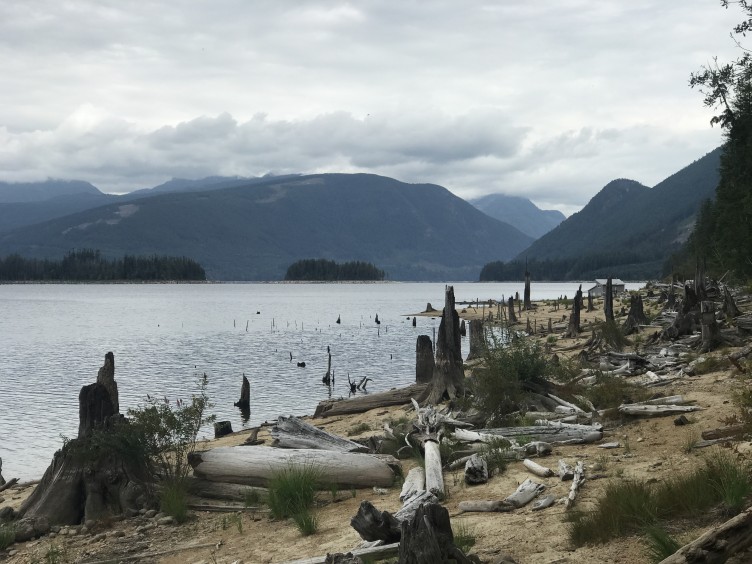 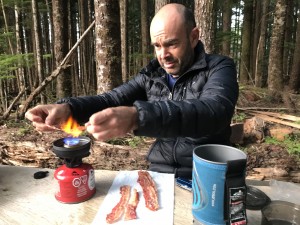 Up to this point in the hike, Mathieu had been having a world of trouble with blisters on his feet.  They were plentiful, they were painful, and they kept coming.  So we had decided that we would hike out to the highway when the trail came close to it, which was around km 135.  However, something magical happened, and Mathieu’s feet toughened up enough that he stopped getting new blisters, and he became a lot more comfortable.  Or maybe it was the bacon that we had with breakfast that revived us (combined with the Pringles the night before).  But we both agreed that we could keep going.  So off we went, loaded down with our last batch of food.  The hike was pretty easy, even though the distance was a bit long, so we arrived at 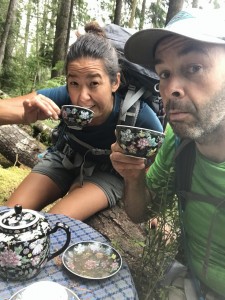 Golden Stanley Hut in pretty good shape. We stopped for an hour to have a swim at Lois Lake campsite (top picture), which had a sandy beach.  All along the trail, we kept seeing odd things that people left behind: some artwork, a stuffed animal tied to a tree, an entire set of old encyclopedias.  But the strangest was in this section, where there was a small table, complete with tablecloth and full tea set!  Just in case you passed this spot at tea time.  Hiking long days sometimes makes you a bit loopy, and it is fun to have a laugh.  Anyway, Golden Stanley Hut was nice, and there was a stream down a fairly steep hill that was awkward to get to but manageable. However, we found out the next day that there was an easier way to access the water that was a bit past the hut.  This was a common theme – sometimes water can be found past the hut, but without any signs at the hut, so you might need to do a bit of exploring if you don’t find water right away. Brad, Lisa and Dave arrived at the hut, and were delighted to find out that we decided to complete the hike, and we spent a nice evening together.

This day was cool and windy, and we 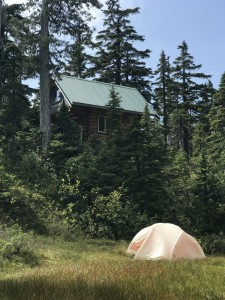 needed to wear our pants (so far we had only been wearing shorts).  Dave and Lisa each saw bears along this section, so we hiked some parts as a big group of 5, banging our sticks and making noise as we walked.  In general, though, even though we were heading to the highest elevation on the entire trail, the hike was relatively gentle, and nowhere near as difficult as either the climb to Confederation Lake or Tin Hat Mountain.  We were a bit confused as to the availability of water at Troubridge Hut, but it was not a problem.  There was a mud flat, which was dry at this time of year, but there was also a small pond directly below the hut, as well as Jocelyn Pond just past the hut.  Jocelyn Pond was beautiful, and had a nice dock so we could lie out in the sun and relax.  We had planned on sleeping in our tent, but it got pretty cool in the evening, so we all slept in the hut, which was winterized.  We even had to get the wood pellet stove going for a bit, to provide a bit of extra heat.  Mathieu and I had saved the chocolate bar from our last food drop as a reward for when we reached Troubridge, so that was a great treat. 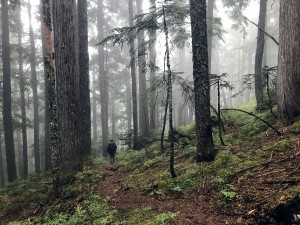 When we woke up at Troubridge, we were happy we decided not to sleep in the tent.  It was cloudy, cool and rainy, and it would have been annoying to pack a wet tent.  Our original plan had been to hike 13 km to Fairview Bay hut, then spend the night there, then complete the last 7km the following day, but we decided to do the whole 21km in one day because of the weather. The summit at Troubridge was not very impressive, because it was very misty or foggy, and we could not see a thing. Too bad, I’m sure the view is quite nice.  The descent was not too tricky, even though it was fairly wet and slippery, and the forest looked beautiful in the mist.  Fairview Bay Hut was on the ocean, which I knew, but I didn’t put two and two together to realize that this mean that the water was also salty, so we decided not to go for a swim.  There was, however, a sign for fresh water about 300m away, so there is drinking water available for those who want to spend the night.  We also met some day hikers there, since we were now only about 7km away from the highway.  I think we may have intimidated them, with all our gear.  Or maybe it was our smell, I don’t know, but they kept their distance. While we were having lunch, we met up with Brad, Lisa and Dave again, so we said our final goodbyes and took a farewell group photo.  After that, we pushed on for the final 7km leg, counting down the last few kilometers, and we were done!  We finished the whole thing!!! 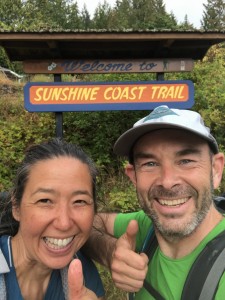 Getting back to Powell River was not as easy as we had hoped.  We knew there was a ferry terminal at the end of the trail, so we had planned on going there to use the bathroom, and maybe check to see if we could catch a bus.  But the ferry terminal could only be accessed by people who had tickets to get on the ferry.  Our next option was to walk up the street, where there was supposed to be a snack shop, so we could eat something greasy (and delicious). But that place was out of business.  Our third thought was to try to hitch a ride from someone getting off the ferry, but we didn’t know the schedule, so didn’t know how long of a wait it would be.  We even asked a guy who lived next to the old snack shop to see if we could pay him to drive us, but he was only willing to go as far as Lang Bay, which wouldn’t help us.  We finally ended up calling for a taxi to drive from Powell River to come get us and bring us back to Powell River. It was expensive ($75), but it worked.  And the driver didn’t complain about our dirty clothes.

We did it!  Despite having some low points, we made it through from end to end in 10 days!  And for the most part, we enjoyed ourselves, and would definitely recommend the hike to other people.  Especially now, before word gets out and it gets too crowded.  We went in late August, mostly because the region goes into winter schedule after Labour Day, 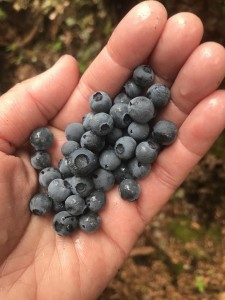 and we wanted to have the best transportation options.  The timing was perfect, because the weather was amazing, for the most part, and there were lots of berries in season – blackberries, blueberries, silal berries and thimble berries.  The black bears were well fed, and were not interested in us and our food. 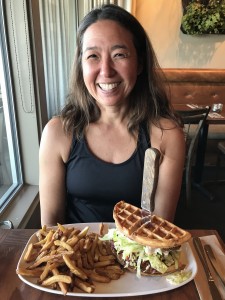 Powell River. At Coastal Cookery, I had a fantastic (and fantastically large) fried chicken waffle sandwich, which went a long way to replenish my calorie deficit. Also, Vietnam Cuisine is an unassuming Asian restaurant that had great service and large portions.  Most of the locals we saw there were packing up half their meals to take home.  Wish we had that option, but there wasn’t a fridge in the hotel we were staying at.  I had a green curry noodle soup, which probably contained an entire can of coconut milk.  Delicious!