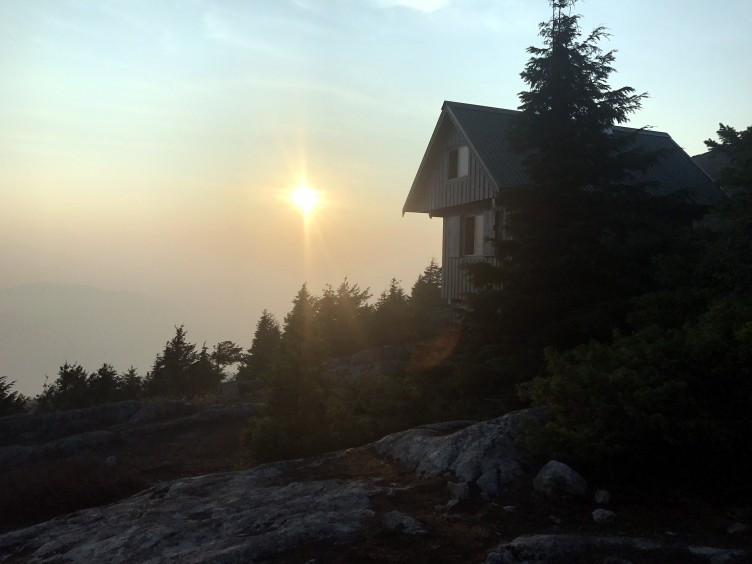 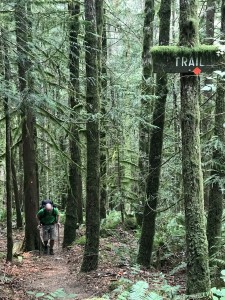 This was our longest day, in terms of distance.  But we were well-fed and well-rested from our night at the Island View Lodge, so we were prepared to get it done.  It turned out that the terrain was not particularly difficult until the very end, so it was a manageable, although long, day.  Also, the weather was overcast and a lot cooler, so it was more comfortable weather for hiking.  Again, since we were close to town, the route markers were not very good or abundant, and we could not find Lost Lake picnic site (where we were planning on having lunch), so instead we stopped for lunch at Inland Lake.  There was a 5km stretch from Confederation Trail junction to Pearson Creek bridge that was pretty steep and rocky, but otherwise the going was pretty easy.  When we got to Confederation Lake Hut, we found out that the number of fellow-hikers had thinned significantly.  Compared to the first night at Manzanita Hut where we were 12 people, we were now down to only 5 – us, plus a group of 3 (Brad, Lisa and Dave).  The other groups decided to take a break for a few days in Powell River, or to just stop the hike at that point.  The Confederation Lake Hut was comfortable and winterized, and we all just slept there for the night,  instead of setting up tents. 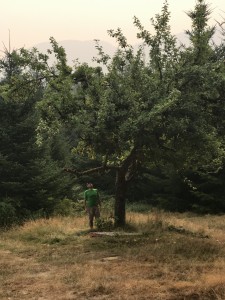 When we woke up, we had no idea how miserable we would be at the end of the day.  This was our hardest day, by a lot.  It did start out pretty well though.  We were worried about the descent downhill from Confederation Lake Hut (my knees are not super great), but it was pretty reasonable.  We decided to skip going to see Fiddlehead Landing Hut (km 81.0) because we weren’t planning on spending the night there, and it would have involved a bit of a detour from the main trail (I think 1 km, round trip, which doesn’t sound like much, but we knew we had a big climb coming).  We had lunch at Fiddlehead Farm, which was a lovely orchard full of apple trees. Apparently it had once been an apple farm, but has since been abandoned. We had been warned by a local couple that it was not uncommon to see bears, munching on the apples, but we didn’t encounter any.  There were also lots of blackberry bushes, which seem to be abundant in the whole region around Powell River.  After eating as much fruit as we thought our stomachs could handle, we started the long slog up Tin Hat Mountain, which is when our day went south. The climb was miserable, and Mathieu was especially miserable, because the blisters on his feet were getting worse and more plentiful.  He had blisters under blisters.  And blisters under the tape he used to try to prevent more blisters.  To top it all off, we both got stung by wasps when we unknowingly passed by a nest that was right on the trail.  We found out later that both Brad and Lisa had been stung as well, but not Dave – he was the first one through, and must have stirred them up, and they took their revenge out on the rest of us.  Neither Mathieu or I had been stung before, but luckily neither of us seemed to be allergic. 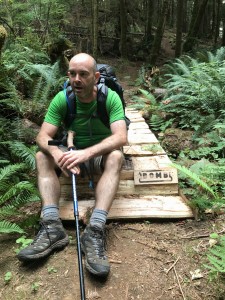 The climb from Fiddlehead Farm to the top of Tin Hat Mountain took us about 5 hours.  It was no steeper than the climb up to Confederation Lake Hut, but it was much longer, and there were a lot of loose rocks, so it was tricky footing.  Plus, we knew that there was no water at the top of Tin Hat Mountain, so we were rationing our water and were getting pretty dehydrated.  What else can we say?  There were no other major events, but we were both hot, tired, and thirsty.  When we finally made it to Tin Hat Cabin, we were greeted by two locals who drove most of the way, then hiked up the last couple hundred meters, so they were fresh as daisies.  We could even see their truck from the hut!  Luckily for everyone, I was too tired to throw loose rocks at them, although I wanted to. (Just kidding, they were nice guys, but I was super cranky.)

And the misery didn’t end once we got to the cabin.  As we mentioned, there was no water, so we couldn’t drink much water or rinse off.  We really should have brought some baby wipes with us, it would have been perfect for this day.  (We didn’t want to carry the extra weight, but I think it would have made us feel a bit more human for the campsites and huts that didn’t have water.)  Plus, there were deer flies everywhere, which were annoying the crap out of me.  And, of course, the never ending blister issues for Mathieu.  The only positive aspect of the climb was that there were lots of wild blueberries around, so we stuffed our faces whenever we stopped to rest.  Plus, the view from the top of the hill was magnificent! 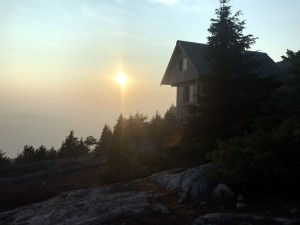 That evening, we made the decision to bail on completing the hike.  We were tempted to ask the guys to drive us back to Powell River in their truck, but decided to hike out.  About 40km away from Tin Hat, the trail came within about 5 km from the highway, which would lead us to Lang Bay, and from there we could find our way back to Powell River.  We decided we could manage the hike to Lang Bay, since most of it would be downhill.  We also decided that we would backtrack a bit, and take the logging road down from Tin Hat.  Tin Hat cabin is situated partway through a loop, so there are two descent options.  Continuing on to complete the loop via Lewis Lake was the longer distance option, and we were also warned by Jesse from Sunshine Coast Shuttle that there was a detour in this section that increased the trail length by about 3 km.  If we backtracked a bit, then headed down the logging roads instead, we would have an easier and shorter descent.  So with these thoughts in mind, we fell into an exhausted sleep. 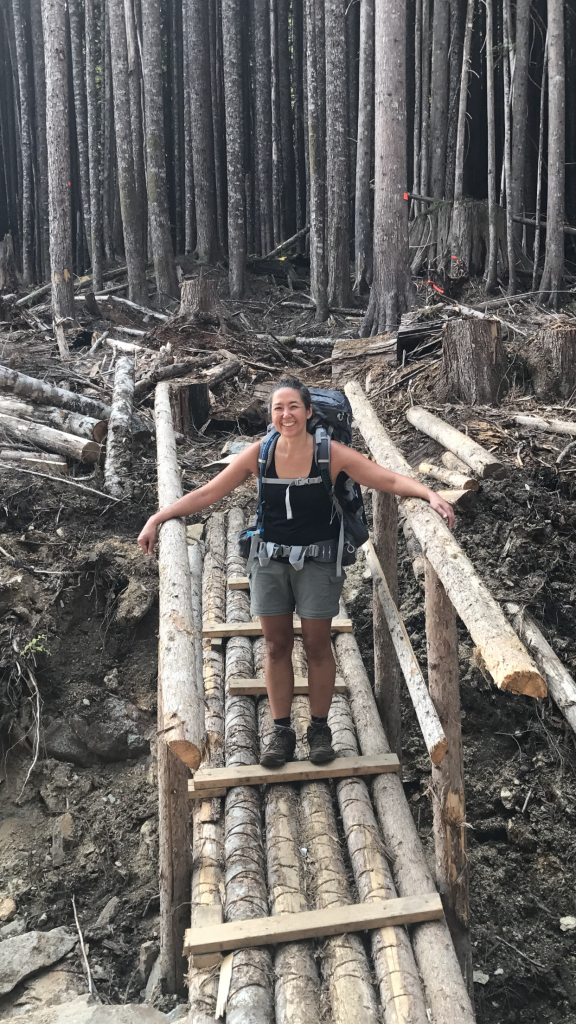 Instead of heading towards Lewis Lake, we decided to retrace our steps a bit and take a series of logging roads towards Spring Lake, where we would rejoin the trail.  Although the roads weren’t particularly well marked, there were not too many options, so we found our way down without difficulty. We didn’t find any water until we hit Spring Lake, so we were happy to fill up there while we had lunch.  At this point, the trail skirted a lot of clear cut logging areas, which was interesting but sad to see.  Otherwise, the hike was fairly uneventful, and not difficult until the last 4 km, so we arrived at Elk Lake Hut in 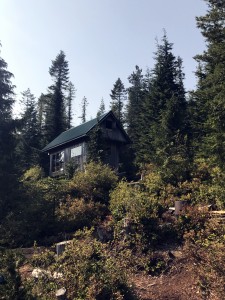 pretty good spirits.  It was sunny and pleasant, and we went for a nice swim in the lake and felt really refreshed. So much better than our arrival at Tin Hat cabin!  Lisa, Brad and Dave joined us at Elk Lake Hut, exhausted, about 3 hours later, even though they are faster hikers than us.  They took the longer way down from Tin Hat Hut, and were really worn out.  And they were annoyed by the extra (unmarked) kilometers, even though they had been warned – being tired can really make you irritable! So we felt good about our decision to take the logging roads.  We said our goodbyes to Lisa, Brad and Dave that evening, because we probably wouldn’t see them again before we headed out to Lang Bay; our groups were planning on staying at different sites the next night. 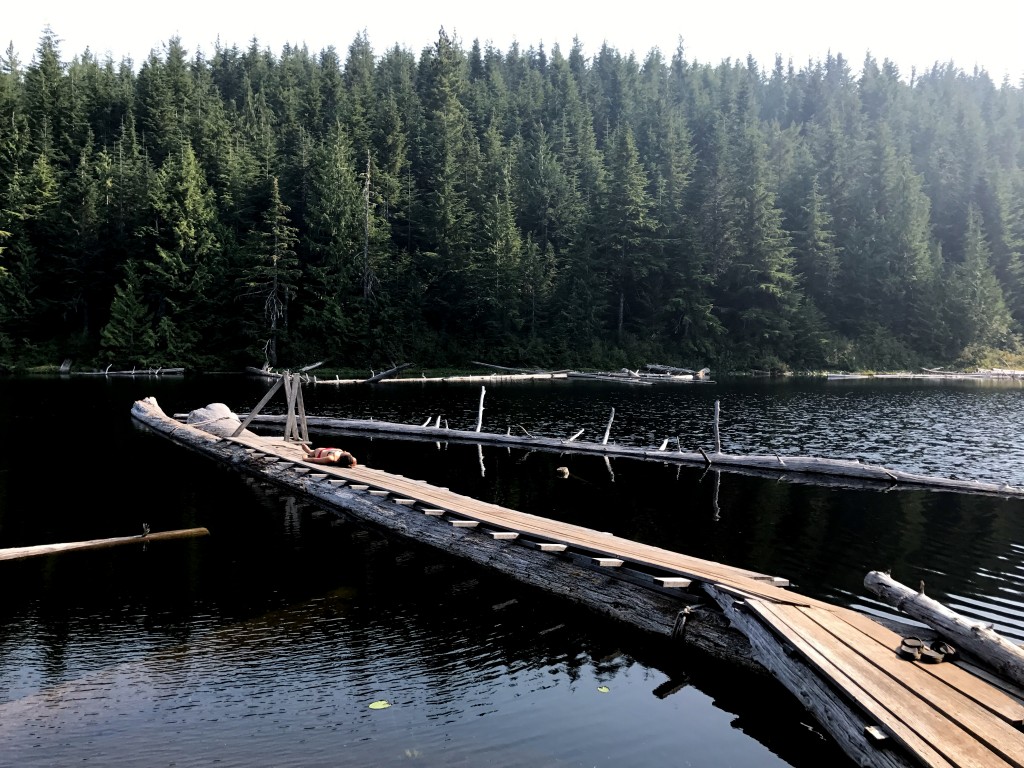 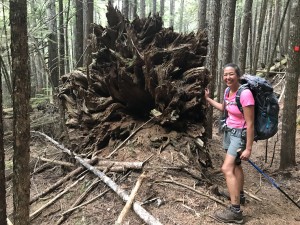 We woke up to a cool and smoky day.  There were a lot of forest fires in British Columbia that summer, and although none were local, the smoke could be seen in most of the province.  It made a really big difference in the weather, and there was a strong smell of fire all day.  This day was not nearly as difficult as we had feared, and the downhill sections were not as steep as advertised.  Did I mention that I hate going downhill?  But it was not too bad.  Water was also in fairly short supply all day, until we arrived at Suicide Creek campsite.  This was a fairly new campsite, and was quite luxurious – there was a large flat area that could comfortably hold 2 or 3 tents, plus water access, an outhouse, and a picnic table.  Even better, it was where we were meeting Jesse from Sunshine Coast Shuttle for our final food drop. He met us right on time, and right at our campsite, since there was a logging road a short distance away.  He was also kind enough to take out our accumulated garbage.  Amazing service!  We had stashed some goodies in the food bag – a can of Pringles, a chocolate bar, and some pre-cooked bacon. We immediately devoured the entire can of Pringles, which was marvellous, and saved the bacon for breakfast! When we stayed overnight in the huts, we could leave our food in the upper sleeping compartment. 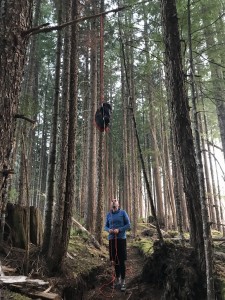 At the campsites, though, we needed to hang our food bag in a tree to protect it from curious bears, which was something Mathieu had fun doing.

I should mention that, according to our GPS, we were well off the marked map, even though we were following the trail signs.  Apparently the trail is frequently re-routed as different areas of the forest get opened up for logging, so at some point the published map becomes useless.  Just follow the trail markers,and you will be fine.  We had a good sleep, and the plan was to hike out to Lang Bay the next day and head back to Powell River.  Hiking only 130 km wasn’t the original plan, but it was still a good effort, and we were happy with that.  Little did we know that salty and greasy food would give us a second wind and newfound energy!